Combining to shoot and finish – U5-U8

This session is designed to improve the player’s combination play in order to create a goal scoring opportunity.

This warm up is designed for the player’s to develop their quality of pass against an active obstruction.

Look to go through this drill around three times with the defender working for 45 seconds each time. Incorporate dynamic stretching each time that all three players have had the opportunity to be the defender. 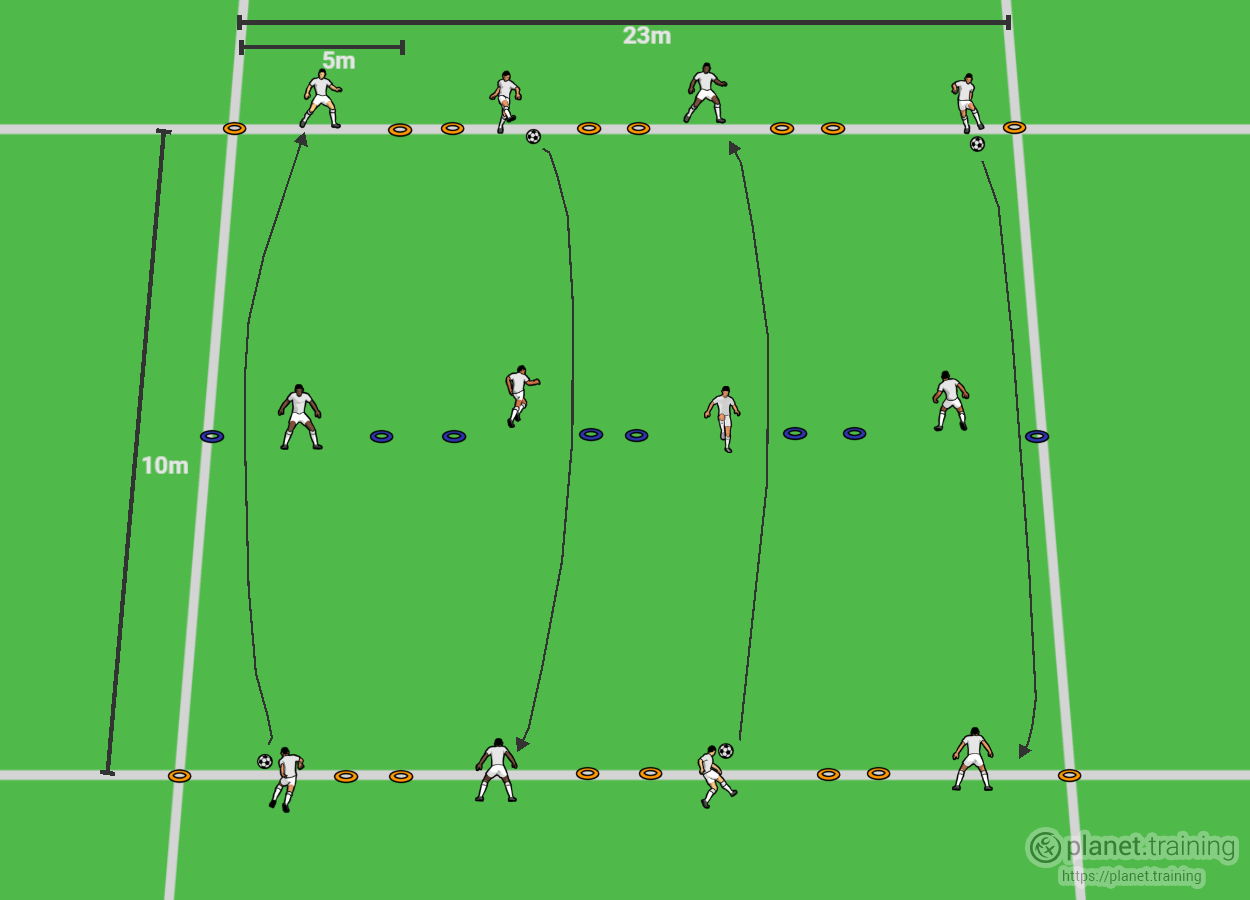 A technical drill designed to develop the player’s ability to combine to create a goal scoring opportunity.

Look to run this drill this continuously for 10 minutes. If the player in goal is not a genuine goalkeeper, look to rotate them every so often. 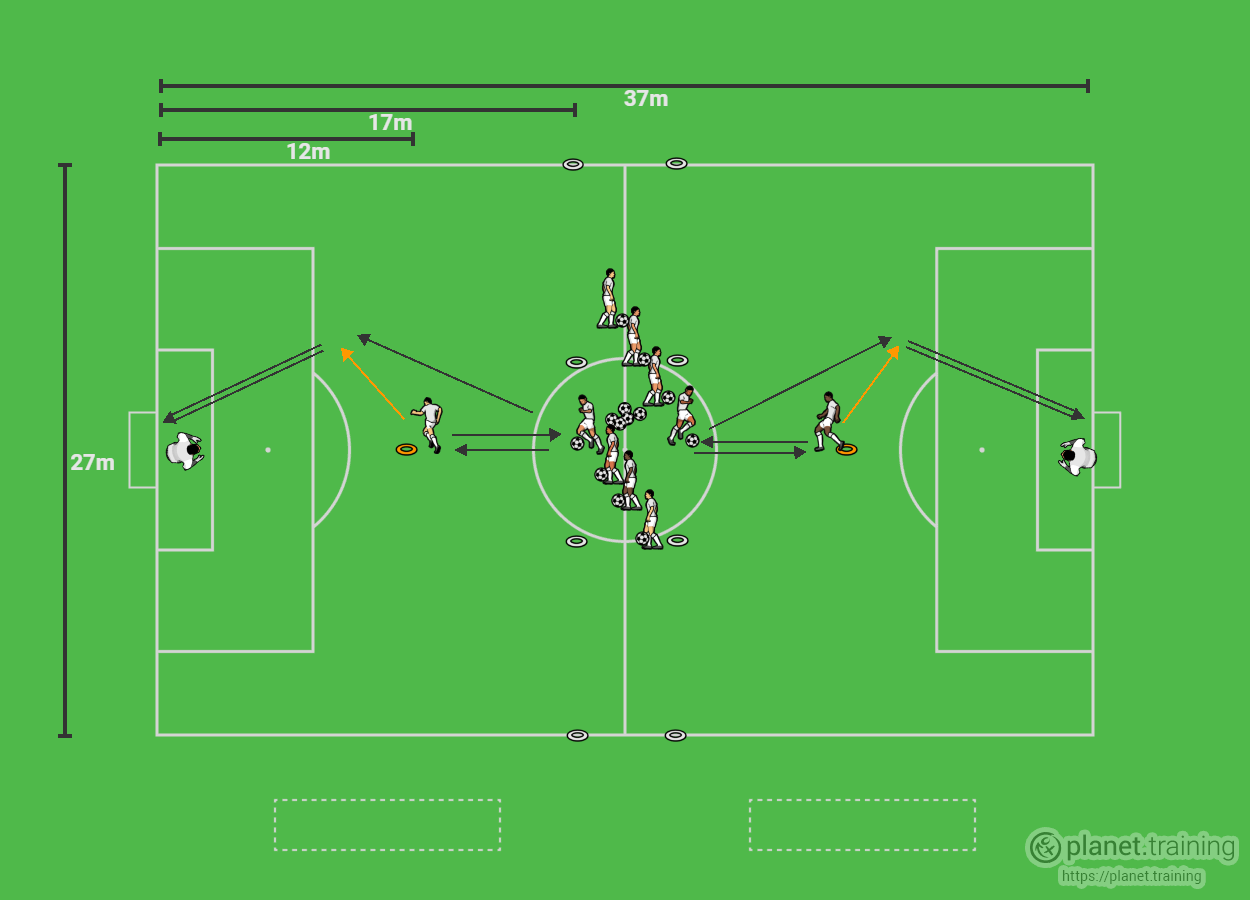 A skill drill designed to improve the player’s ability to combine to create goal scoring opportunities in a 2 vs. 2.

12 players should divide themselves into six pairs. Two pairs should be inside the area competing against one another. The rest of the players not involved in the 2 vs. 2 will act as spare players on the outside. A pair should volunteer themselves to be the goalkeepers, unless there is genuine goalkeeper within the group.

The two pairs inside the area will compete against one another trying to score in the opposition’s goal. When either of the two pairs score, the winners stay on and the losing pair have to rotate with another pair on the outside. Normal match conditions apply and the spare players on the outside are only allowed two touches. The pair who accumulates the longest winning streak are declared the winners.

Look to split this drill into x2 10 minute halves and alternate the pairs during half time. If the players in goal are not genuine goalkeepers, look to rotate them every so often. 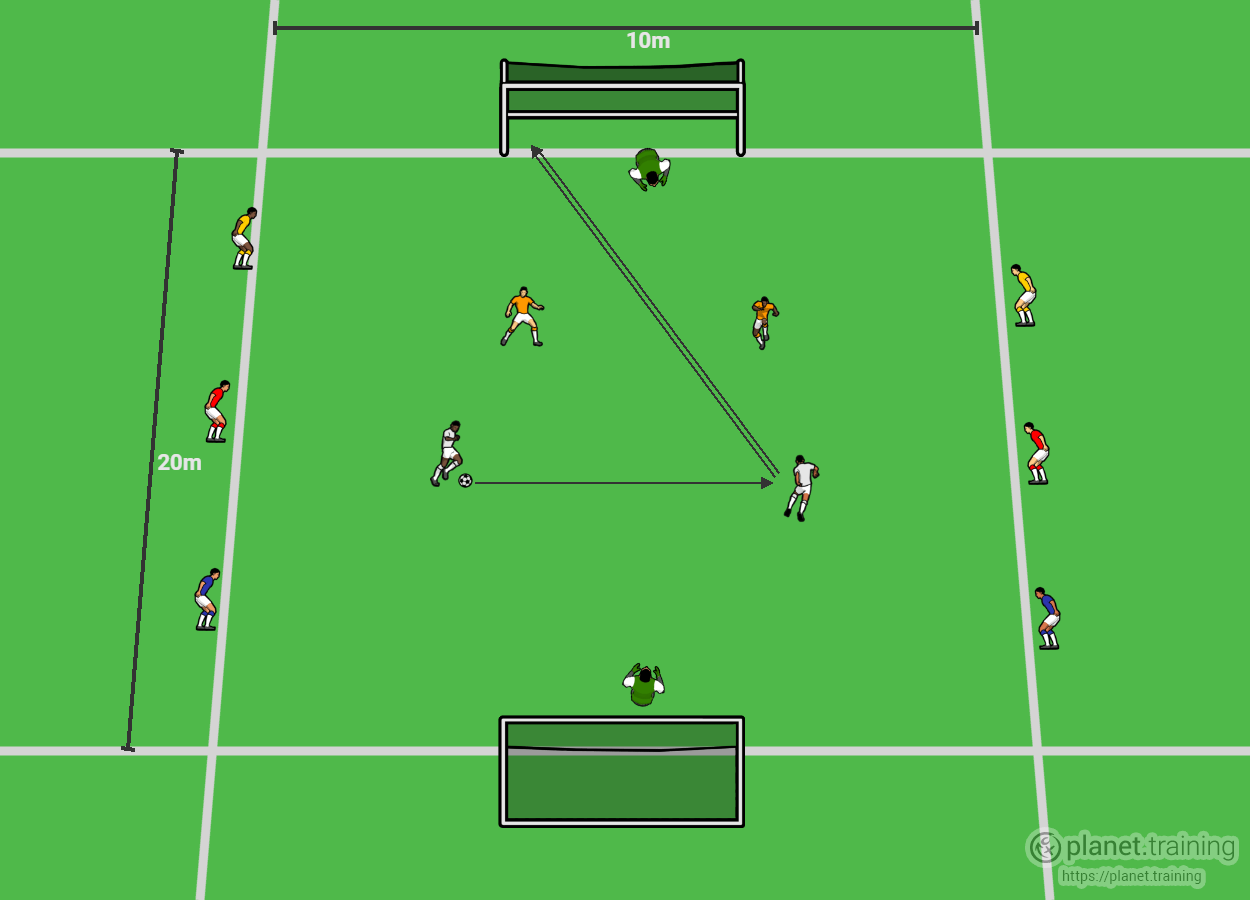 A game-related practice designed to encourage the players to combine to create goal scoring opportunities.

12 players should divide themselves into two teams (six players on each team). One player from each team should volunteer themselves to be the goalkeeper, unless there is genuine goalkeeper within the group.

The game-related practice is normal match conditions. Before a team is able to shoot and finish they must make at least five passes within their team. Players are able to score and make the passes from anywhere on the pitch.

Look to split the game into x2 10 minute halves. Alternate teams if the game is not competitive. If the player in goal is not a genuine goalkeeper, look to rotate them every so often. 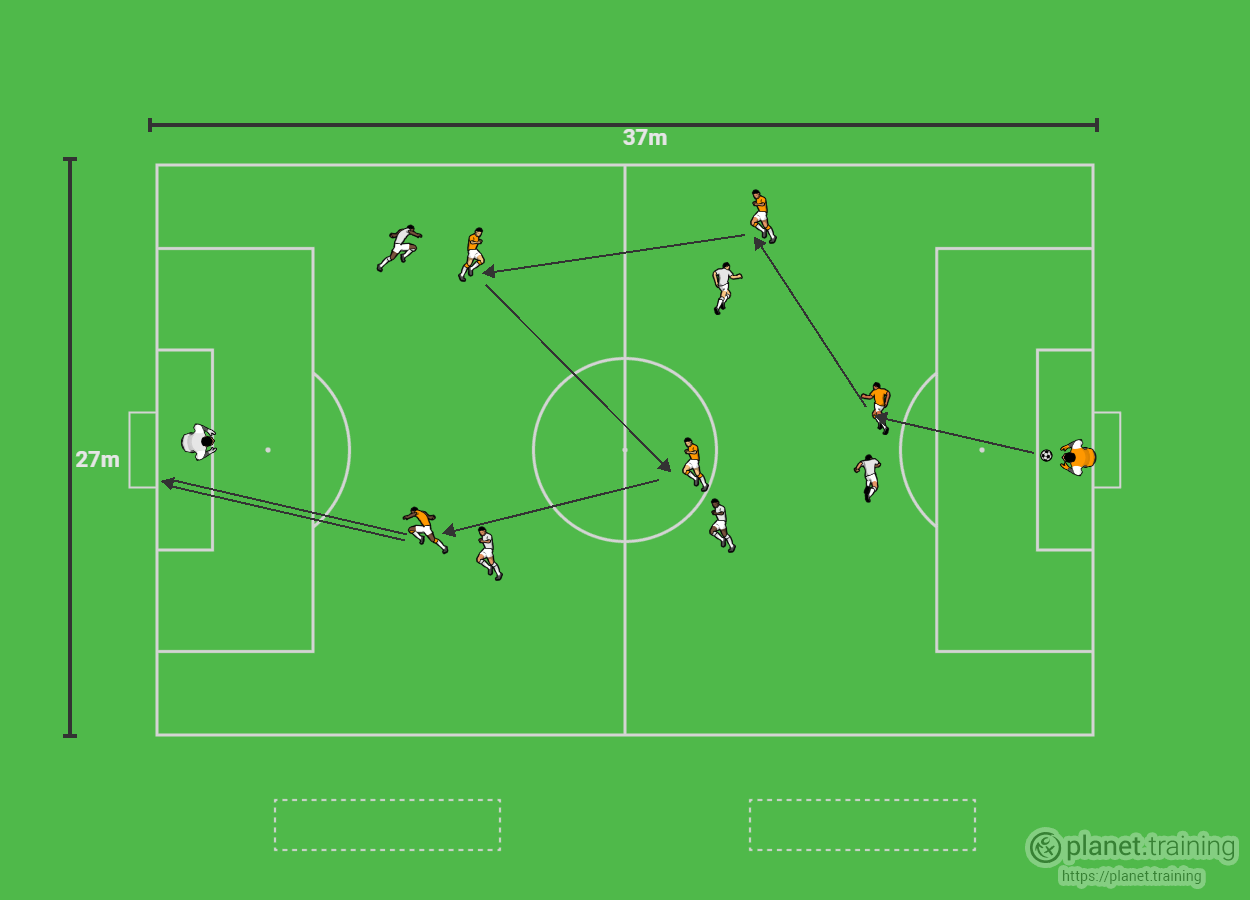 The animations and images are created via planet.training

We use cookies on our website to give you the most relevant experience by remembering your preferences and repeat visits. By clicking “Accept All”, you consent to the use of ALL the cookies. However, you may visit "Cookie Settings" to provide a controlled consent.
Cookie SettingsAccept All
Manage consent

This website uses cookies to improve your experience while you navigate through the website. Out of these, the cookies that are categorized as necessary are stored on your browser as they are essential for the working of basic functionalities of the website. We also use third-party cookies that help us analyze and understand how you use this website. These cookies will be stored in your browser only with your consent. You also have the option to opt-out of these cookies. But opting out of some of these cookies may affect your browsing experience.
Necessary Always Enabled
Necessary cookies are absolutely essential for the website to function properly. These cookies ensure basic functionalities and security features of the website, anonymously.
Functional
Functional cookies help to perform certain functionalities like sharing the content of the website on social media platforms, collect feedbacks, and other third-party features.
Performance
Performance cookies are used to understand and analyze the key performance indexes of the website which helps in delivering a better user experience for the visitors.
Analytics
Analytical cookies are used to understand how visitors interact with the website. These cookies help provide information on metrics the number of visitors, bounce rate, traffic source, etc.
Advertisement
Advertisement cookies are used to provide visitors with relevant ads and marketing campaigns. These cookies track visitors across websites and collect information to provide customized ads.
Others
Other uncategorized cookies are those that are being analyzed and have not been classified into a category as yet.
SAVE & ACCEPT